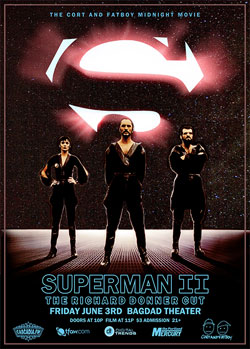 On June 3rd, the Cort and Fatboy Midnight Movie will unleash upon the Bagdad the full fury of Terence Stamp’s General Zod in Superman II: The Richard Donner Cut. The cut will be digitally screened, and for most, this will be the first time that this version of the film will ever have been seen in a theater. The Richard Donner cut aims to return the film, taken away from Donner after he’d shot 80% of it, closer to his original vision, restoring not only Marlon Brando’s scenes, but the original opening, extra carnage as Zod storms the White House, and the John Williams score that helped cement Christopher Reeve’s Superman as THE incarnation of the Man of Steel, while removing some of the more relentlessly silly elements; like Superman’s finger lasers, or peeling a giant cellophane S off the front of his costume and making a Villain Burrito with it, or some jackass roller skating backwards with a multicolored umbrella through a giant superfight.