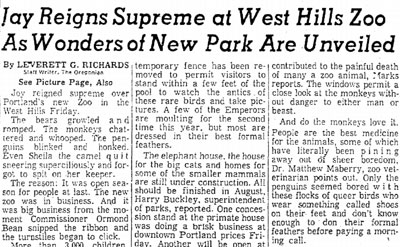 A front page headline in The Oregonian declared on July 4, 1959: Jay [sic] Reigns Supreme at West Hills Zoo As Wonders of New Park Are Unveiled.

The bears growled and romped. The monkeys chattered and whooped. The penguins blinked and honked. Even Sheila the camel quit sneering superciliously and forgot to spit on her keeper.

The reason: It was open season for people at last. The new zoo was in business. And it was big business from the moment Commissioner Ormond Bean snipped the ribbon and the turnstiles began to click.

More than 3,000 children, women and men – in that order – had flocked through the gates the first day.