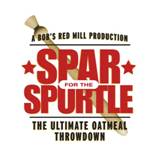 Matthew Cox, representing Bob’s Red Mill, stunned the world in 2009 when he took home the Golden Spurtle trophy, awarded to the world champion porridge maker. Remarkably, it was the first time an American team had entered the competition. Alas in 2010 the team did not fare as well. So for the 2011 competition, to be held on October 9, 2011 in Carrbridge, Scotland, Bob’s Red Mill is soliciting your help!

Think that you have what it takes to dish up the world’s best bowl of oatmeal? Bob’s Red Mill Natural Foods, official purveyors of “The World’s Best Oatmeal,” wants to find out.

The company announced today the launch of its “Spar for the Spurtle” Porridge Making Contest. The contest invites home cooks and professional chefs alike to submit videos demonstrating a unique recipe that makes use of Bob’s Red Mill Steel Cut Oats – the World’s Best Oats. From the entries, three finalists will be flown to Portland, Ore. to compete in a live cook-off. The winner of that cook-off will travel with the Bob’s Red Mill team to compete in the 18th Annual Golden Spurtle World Porridge Making Championship in Scotland.

And read my account of a pilgrimage to behold the glorious Golden Spurtle.