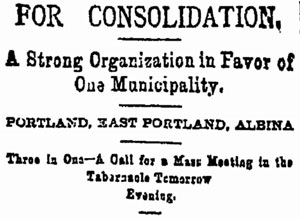 In June of 1891 the citizens of the Multnomah County municipalities of Portland, East Portland, and Albina voted in a special election to consolidate the three cities under the banner of Portland. The effective date of the consolidation was July 6, 1891.

The New York Times, on June 14, 1891, reported on the significance of the consolidation vote under the headline Three Cities in One: Portland, Oregon, Takes a Long Stride to the Front.

A dispatch of four or five lines, probably tucked away in the news summaries of last Tuesday’s papers, announced that at a special election the day before the people of Portland, East Portland, and Albina, Oregon, had decided to unite the three municipalities under a single City Government. This is an event of more importance that this treatment would indicate, for it advances Portland from the sixty-first to the forty-first city in the United States, to say nothing of the probably effect upon its future development.

The special election was held after the Oregon Legislature authorized the voters to decide the fate of consolidation, which passed in a landslide; 11,840 for and only 1,714 opposed. The only opposition came, reported the Times, from the members and “bosses” of the rings in possession of the local offices, who happened to be mostly Republican in politics.