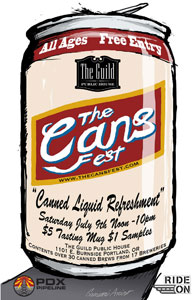 The New School has the scoop:

Perhaps the biggest trend in craft beer right now is the reintroduction of cans as packaging, so a festival with some of the Oregon pioneers of the canning revolution, like Fort George and Caldera, just makes sense. Many other canned beers not usually found in Oregon also will be representing, like Oskar Blues. Another I am pretty stoked about is Central City from BC with their Red Racer, a beer I compared favorably to Racer 5. The fest is even trotting out some other breweries I have not even heard of, including one from Alaska. If we are lucky we might also see the first Boneyard cans and maybe even some stuff from Surly. In all we can expect over 30 beers from over 17 breweries.

Visit TheCansFest.com for the full beer list and other details. The fest runs from noon until 10pm. Tasting mugs are $5 and samples are $1.