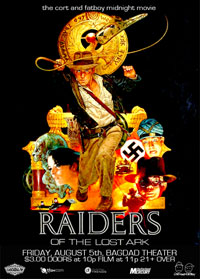 Join Cort and Fatboy on Friday, August 5, 2011 for a special Midnight Movie presentation of Raiders of the Lost Ark.

January 8th, 2006: The monthly Portland late-night staple, The Cort and Fatboy Midnight Movie, got its accidental start as a charity screening for about 20 people at McMenamin’s Kennedy School. A DVD of Raiders of The Lost Ark was shown promptly at midnight, and maybe the resolution was a little low, maybe the colors were a little flat, but the movie did what it always does – completely enthralled the audience sitting in front of it. It’s only the finest action movie ever made, after all. Not even the Ark itself could likely hold the pure magic Spielberg, Lucas, Kasdan and Ford managed to harness for that film.

Friday, August 5th, 2011: Cort and Fatboy continue to celebrate the 5th anniversary of the Midnight Movies inexplicably surviving as long as they have by going back to the film that started it all. And maybe the 35mm print will be a little faded, a little scratched up, maybe the audio will be a little fuzzy, but Raiders of the Lost Ark is going to do what it always does, because it’s only the finest action movie ever made, after all.