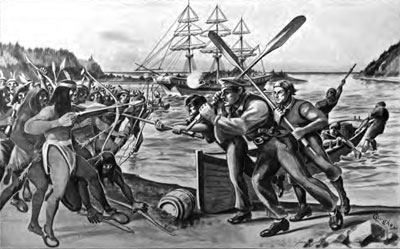 Sailing from Boston Harbor in 1787 in the ships Columbia Rediviva and Lady Washington, Captains John Kendrick and Robert Gray brought the first American fur trading enterprise to the north Pacific Coast (Oregon Geographic Names by Lewis A. McArthur in The Quarterly of the Oregon Historical Society Vol. 26, No. 4 – Dec., 1925).

Sailing north along the coast, on August 12, 1788, Captain Gray in the Lady Washington anchored off Tillamook Bay in preparation for crossing the bar. Two day later they did so and obtained fresh water and food. That particular visit did not end well, however, when a skirmish occurred between Indians and Captain Grey’s crew. Gray called the place Murderers’ Harbour.