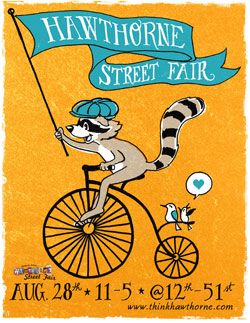 For the third year in a row the fair coincides with the Southeast Portland Sunday Parkways, which intersects with Hawthorne at 32nd and 45th. Most of the street fair activities take place between 12th and 51st (take a look at the map). Clusters of arts, crafts, and food vendors pepper the side streets, sidewalks, and adjacent parking lots.

The Acoustic Stage is stationed at 41st and Hawthorne and features Pug Bernhard One Man Accordion Band, and others, throughout the day. The Showcase Stage at 34th features Sportin’ Lifers, Smilin’ Johns Bluegrass Band, and others.

Kids activities, including face painting, bubbles, kids music, puppet shows, and more, can be found (or avoided, as the case may be) at
35th.

Heather and I took in both the Sunday Parkways and Hawthorne Street Fair in 2009. The Hawthorne Street Fair does not really compare to Portland’s other renown neighborhood fests – the main drag is not closed to car traffic like it is during the Mississippi, Alberta, Belmont, and Multnomah Village street fairs. One pleasant surprise this year though, is the two beer gardens – one adjacent to Bazi Beierbrasserie (SE 32nd), and one at the Eagles Lodge (SE 50th).

Visit HawthorneStreetFair.com and the Facebook event page for more details, including the full music schedule and more activities.