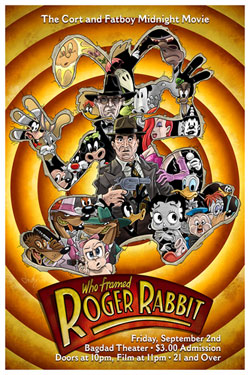 Join Cort and Fatboy on Friday, September 2, 2011 for a Midnight Movie:

Normally we show movies at the Bagdad Theater. Thread some film through a projector, turn a big lightbulb on – Boom. Magic. But Friday, September 2nd? That’s not what’s happening. We’re taking the contents of your childhood, and we’re tipping that on its side, spilling it into the projector, and we’re gonna splash that all over the screen in all its vivid, hand-painted, goofy glory.

This is the original 35mm film, filling the Bagdad’s screen with Bob Zemeckis’ genius, Bob Hoskins’ grumpiness, Roger’s ridiculousness and Jessica’s allure, with Bugs, Mickey, Donald, Daffy, Betty Boop, Droopy Dog and about a hundred other classic cartoons sharing the screen for the first and likely only time together.