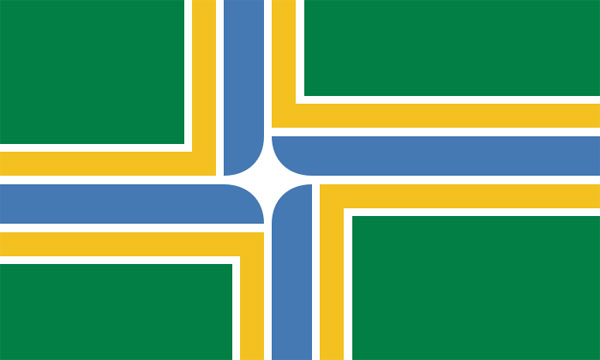 The Portland City Council, with Ordinance 176874, officially adopted the flag of the City of Portland (with which all Dave Knows Portland readers are familiar) on September 4, 2002.

The elegant design’s symbolism is explained on the City Flag page of the City of Portland Auditor’s Office website:

Green symbolizes Oregon’s forests, which surround Portland. The intersecting vertical and horizontal blue stripes represent the Columbia and WillametteRivers, with the central white star (technically, a “hypocycloid”) signifying Portland at their confluence. The yellow stripes symbolize the harvest of golden yellow grain (Portland is a major exporter of wheat) and the gold of commerce. The white stripes are merely decorative. The offset cross is not intended to resemble a Scandinavian cross. 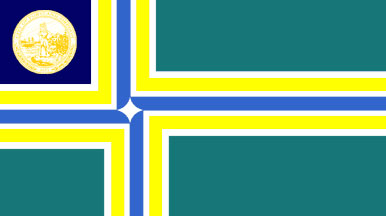 The flag dates from 1969, however, when renowned local graphic designer Douglas Lynch submitted his design to a committee established by then Mayor Terry Schrunk (The Oregonian, 18 December 1969). In January 1970 that design, which was quite similar to the 2002 version, was officially adopted as the city flag. The main difference between the current and original design is the inclusion of the city seal on a dark blue field in the upper left of the older design. In 2002, with the encouragement of the Portland Flag Association, Mr. Lynch simplified and improved the design.