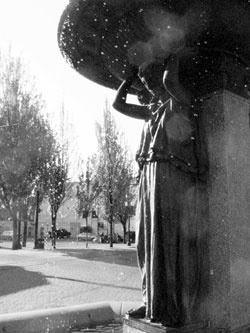 The City of Portland’s oldest piece of public art, Skidmore Fountain, was dedicated on Saturday, September 22, 1888 (The Sunday Oregonian, 23 September 1888). Druggist Stephen G. Skidmore left a bequest of $5000 for the construction of the fountain when he died in San Rafael, California in 1883. He had been a Portland resident from 1850.

In 1885, after the money was received, a committee appointed by the city chose sculptor and artist Olin L. Warner to design the fountain. He created the bronze pieces in his New York studio, and had them cast in Philadelphia.

The dedication ceremony took place at 3pm. After a couple speeches, the fountain was unveiled.

Mr. C. E. Sitton then deftly removed the veiling from the statue before the eyes of the expectant multitude, and for a moment all were absorbed in silent contemplation of the beauty of the structure; then applause rang out heartily and continued for several minutes.

Another speech was given, and the water [not beer] was turned on. From the central jet it rose several feet into the air, falling into the upper basin, thence trickling over the brim into the larger one below, while from the lions’ heads the larger streams gushed into the troughs below.

Thus was fittingly crowned the labors of three years; thus was appropriately commemorated the charity of Stephen G. Skidmore, and another substantial feature of Portland’s material and artistic advancement.