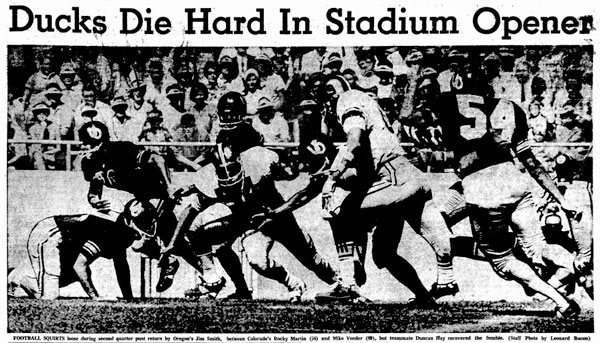 On Saturday September 23, 1967, by a score of 17-13, the Colorado Buffaloes spoiled the Oregon Ducks’ Autzen Stadium debut in front of 27,500 fans (The Sunday Oregonian, 24 September 1967). Not that it would console the Ducks, but the Buffaloes were the Big Eight favorite that year and the expected margin was 13 to 20 points.

Autzen Stadium was named for the UO alumnus leader Thomas Autzen, who had donated to the project. It was designed by Skidmore Owings and Merrill, cost about $3 million, and took 9 months to build. The original capacity was 41,000. Previous to its completion the Ducks typically played three games each season in Eugene, at Hayward Field. The rest of their home games were played in Portland’s Multnomah Stadium (now Jeld-Wen Field).