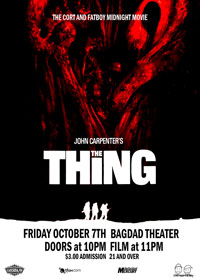 Take a bunch of bearded, paranoid men (including Kurt Russell,) stick em all in Antarctica and then hide a shapeshifting alien inside of a cute little dog. Let the dog loose, let practical effects wizards Rob Bottin and Stan Winston go wild on the set with a bunch of goop and gore, and you end up with one of the most effective horror films ever, containing not only some of the best jump scares in cinema history, but also Wilford Brimley with a gun and no mustache, which is a bit of existential horror all its own.