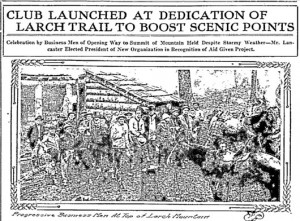 Under the auspices of the Progressive Business Men’s Club, 100 nature lovers set out to hike the trail that links the base of Multnomah Falls with Larch Mountain for the trail’s formal dedication on Sunday, October 3, 1915 (Morning Oregonian, 3 October 1915).

The trail was built through the combined efforts, and $8000, of the Progressive Business Men’s Club, the U.S. Forest Service, and Simon Benson and his son Amos (Morning Oregonian, 10 October 1915).

Larch Mountain, one of the main peaks at the western edge of the Cascades, 4045* feet high, commands a magnificent view of the Columbia River Gorge for miles in both directions. But aside from this view, the mountain, with its heavy timber and any picturesque features, is worth going miles to see. . . .

This trail in places follows the upper portion of Multnomah Creek, which forms the world-famous Multnomah Falls where it drops over a cliff 800** feet high at one side of the Columbia River Highway, near the river. It is not generally known that it has other falls only less picturesque far above Multnomah Falls. The trail passes these falls and other places of rare natural beauty.

Due to stormy weather, only 25 indomitable hikers, including one woman, Mrs. George Jackson, reached the summit for the ceremony.

** Actually Multnomah Falls is only 620 feet, if you count both drops – the 542 foot upper falls, the 69 foot lower falls, and the 9 foot between the two.