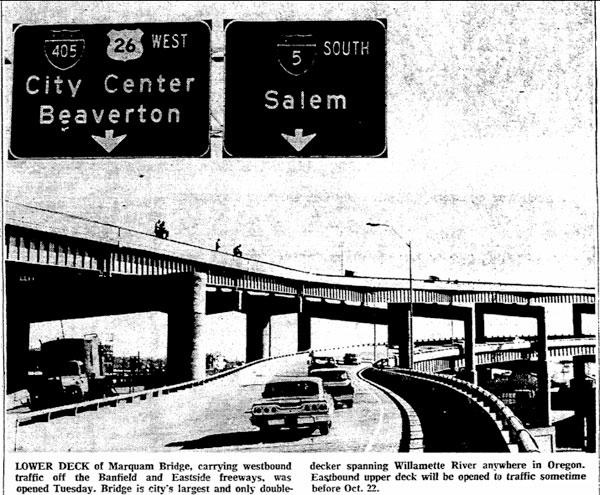 In the nascent Marquam Bridge, Portlanders had their own Bridge to Nowhere in the mid-60s, but that bridge finally went somewhere when the State Highway Department officially opened the lower, westbound, deck to traffic on Tuesday, October 4, 1966 (The Oregonian, 5 October 1966).

The action ended many frustrating months of delay for bridge builders as a right-of-way dispute tied up the structure’s eastside work for more than a year.

Westbound traffic off the Banfield and Eastside Freeways will now use the lower deck to go either south on Interstate 5 or north on the Stadium Freeway.

The $20 million bridge is still the city’s largest and at the time was the only double deck structure spanning the Willamette River anywhere in the state. The top deck opened on October 18, 1966 (The Oregonian, 18 October 1966).