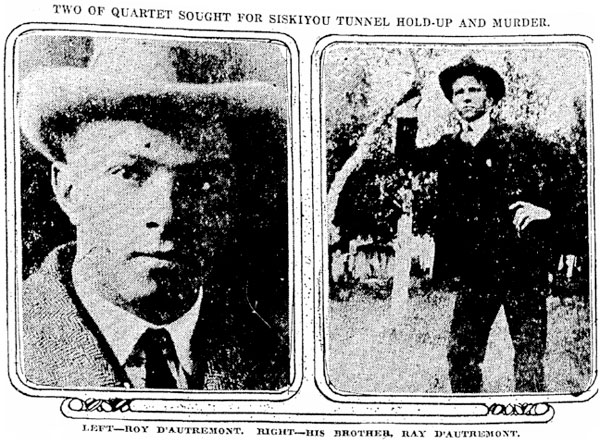 The Last Great Train Robbery in the West took place on October 11, 1923 when brothers Ray, Roy, and Hugh De Autremont attempted to rob a Southern Pacific train they believed carried half a million dollars in gold.

The three had been working as lumberjacks in Silverton, Oregon when they decided to see if crime would pay better. They climbed aboard the southbound passenger train as it slowed down at a tunnel on the Siskiyou Pass. And that’s when everything that could go wrong did go wrong. The train was not carrying as much gold as they believed, for one thing, and the gang ultimately fled the scene empty-handed . . . but first they murdered the engineer, brakeman, and fireman and blew up the mail car when they got a little too enthusiastic with the dynamite.

Besides the loot (real or imagined), the brother also left behind a number of incriminating clues. They were quickly named as suspects and a manhunt ensued. It lasted until 1927. In early February Hugh was captured in the Philipines (Morning Oregonian, 14 February 1927). Ray and Roy were apprehended in Ohio in June (Morning Oregonian, 10 June 1927).

They were found guilty and sentenced to life in prison. Hugh was paroled in 1958 and died soon thereafter. Ray was paroled in 1961 and lived until 1984. Roy was diagnosed with schizophrenia in 1949 and died in the Oregon State Hospital in 1983.