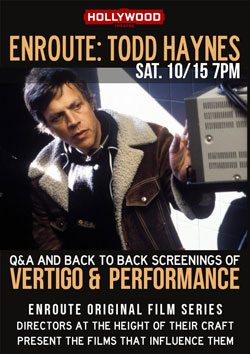 Filmmaker Todd Haynes kicks off En Route, the new Hollywood Theatre series featuring directors at the height of their craft presenting films that have influence their work, this Saturday, October 15, 2011.

Todd Haynes, considered a defining figure in the New Queer Cinema movement, is the award winning director of Velvet Goldmine, Far From Heaven, Superstar: The Karen Carpenter Story, and the new TV series Mildred Pierce. The films he will introduce and answer questions about on Saturday night are Performance and Vertigo.

London gangsters, free love, identity tumult, rapid intercutting, and rock and roll all come together in “Performance,” which features Mick Jagger in an eerily meta role. “The only performance that makes it, that really makes it, is the one that achieves madness,” Jagger’s character proclaims, and the film takes this to heart. Coupled with the shifting realities of Alfred Hitchcock’s masterpiece “Vertigo,” this double feature promises a rollercoaster ride into some of cinema’s wildest places.

Tickets are only $10 for both films. Buy tickets at the theater box office (4122 NE Sandy) or online. Vertigo begins at 7pm, Performance at 9:45pm.