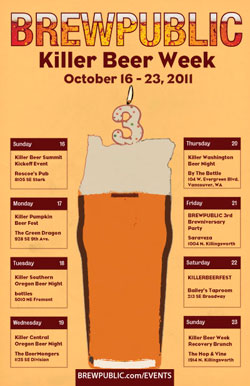 Brewpublic‘s third annual Killer Beer Week takes place from Sunday to Sunday, October 16 through 23, 2011. KillerBeerWeek aims to deliver some of the best and most interesting beers the region has to offer at some of the best pubs in the Portland area.

Visit Brewpublic.com for more details on each event, including participating breweries and