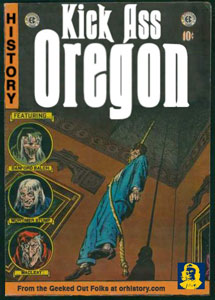 Pioneer Danford Balch arrived in Oregon from Massachusetts and settled in the area that is now part of Macleay Park in Northwest Portland in 1850. Mortimer, the oldest son of the nearby Stump family, courted the Balch’s oldest daughter Anna – despite Danford Balch’s disapproval.

In the spring of 1859 Mortimer and Anna eloped in Vancouver. A couple weeks later Danford spotted young Mortimer on the Stark Street Ferry in Portland. Balch took his gun, resting by his left hand, marched to the ferry and shot Stump before he realized what he was doing. He had been drinking a bit (Morning Oregonian, 28 February 1928). Balch was arrested, locked up, and sentenced to be hanged.

At 10:45am on Monday, October 17, 1859, Danford Balch was hanged before a crowd of 600 people. His daughter Anna was one of those in the crowd. He was the first person hung by the state of Oregon.

For much more on the story, check out Kick Ass Oregon History Vol 1 #4: Danford Balch Hanging.