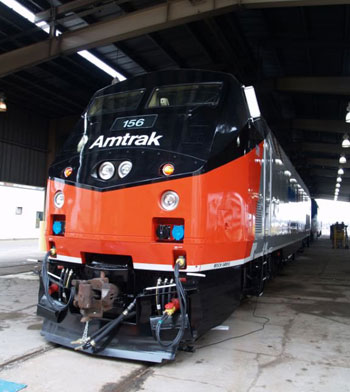 As part of Amtrak’s 40th Anniversary celebration the Amtrak Exhibit Train, a traveling display showcasing historic memorabilia, will make a stop at Portland’s Union Station on Saturday and Sunday, October 29 and 30, 2011.

The Exhibit Train showcases Amtrak history over the decades, displaying memorabilia such as vintage advertising, past menus and dinnerware, and period uniforms. The Exhibit Train will also include a train-themed kids’ activity area, Chuggington Depot, based on the popular television series on Disney Junior and designed for kids ages 2-7 and their families. In addition, commemorative 40th anniversary merchandise will be available for purchase onboard the train.

There will als be exhibits inside the station from railroad history and railroad safety groups, tourist destinations, and other local travel partners. The exhibit is open 10am to 4pm each day and is free and open to the public. This stop is the Exhibit Train’s only stop in Oregon.