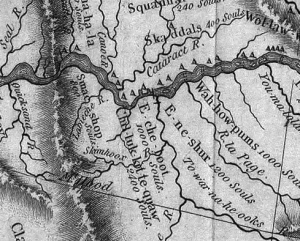 From their camp near what is now Wishram, Washington, explorers Lewis and Clark traveled down the Columbia River on October 22, 1805 to where another river emptied into it above Celilo Falls.

In their journals they referred to the Columbia River tributary they had spotted by the Indian name Towarnehiooks, and on their return pass in 1806 they spotted it again and named it the Clark River. But the name that ultimately prevailed for the river, the Deschutes, is derived from the fur trader era’s Riviere des Chutes, meaning River of the Falls (Oregon Geographic Names 7TH Edition, by Lewis A. and Lewis L. McArthur). The falls referred to are those on the Columbia – the Deschutes itself is not noted for water falls.