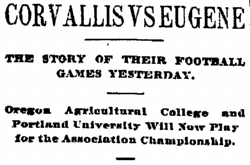 The first “Civil War” game between between the Oregon State University and the University of Oregon football teams took place in Corvallis on Saturday, November 3, 1894 (Sunday Oregonian, 4 November 1894).

Oregon State was then known as the Oregon Agricultural College, and the University of Oregon was referred to as the State University.

Five hundred people saw the Oregon Agricultural College football team defeat the State University eleven today by a score of 16 to 0. The game was marked by brilliant plays throughout. Playing began at 1:30 and for the first few plays the Eugene players went with a dash that won plaudits from all, and it seemed that they would do up the “Farmers” in short order. Their game consisted principally of straight runs around the ends. On center plays their work was generally ineffectual against the heavy rush line of the home team, and many times cost them considerable loss in yardage. Their interference was fairly good. Much improvement could have been made by concentration, for their playing seemed to be too open. The Oregon Agricultural College made large gains around Eugene’s right end.

The teams have met 113 more times since 1894. They have played to ties 10 times. Eugene’s team has won 56 of the match ups, while Corvallis has been victorious 46 times.