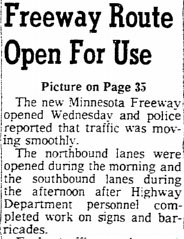 Portland’s Minnesota Freeway through North Portland, part of the Interstate 5 system, opened to automobile traffic on December 2, 1964 (The Oregonian, 3 December 1964). Construction of the $22 million, 4.8 mile strip of pavement began in 1959.

The freeway’s opening marked the end of an era for the neon-lit Interstate Avenue.

Traffic raced through North Portland in a trench, three blocks west of the Highway 99W surface route. At service stations, restaurants and motels along “the Avenue,” implications were setting in. The era of interstate travel on Interstate Avenue was over.