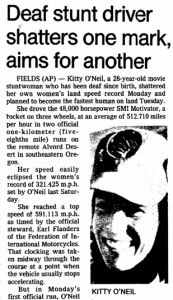 For one second after she blasted off, the force of acceleration pushed Kitty’s guts gently back against her lungs, but except for this minor discomfort, the ride was a smooth one. Within five seconds she was going 180 mph. In 15 seconds she was a mile down the course, doing 500. Five seconds later she was going 200 mph faster than any landbound woman had traveled before, reaching a speed of about 600 mph and clocking 514.120 through a one-kilometer speed trap.

The international rules for land-speed attempts require the driver to complete a second run in the opposite direction through the same timing trap within two hours. There was almost an hour to spare when Kitty streaked back through the same kilometer in 4.375 seconds (only 24 thousandths of a second slower than her first run) for a two-way average speed of 512.710 mph. [Sports Illustrated, 17 January 1977]