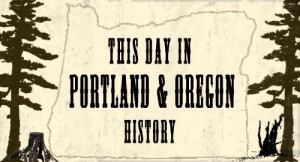 Sometime in 2010 I realized that with my Multnomah County library card I had access to The Oregonian Historical Archive, among other research databases and sites. That realization gave me the bright idea to write a “Day in History” post for every day in 2011. I started innocently enough on January 1st. Ends up writing the pieces was the easy part – for most posts I didn’t delve into the topic too deeply. But the project ended up to be much more of a time sink than I had anticipated. Some days it was easy to find a historical event to write about, other days it took me literally hours to find something. But thanks to my obsessive compulsive tendencies I completed the task, with my final post on December 31, 2011.

Below is a list of the January historical events I found, assembled here in one place for your edification and amusement.