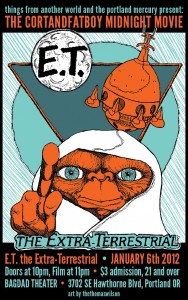 This is probably the height of Spielberg’s powers as master-manipulator, plucker of heartstrings, and jerker of tears. And whether the FBI agents are toting shotguns or packing walkie-talkies (really, who sends a vanload of shotgun toting FBI agents after a bunch of prepubescents on BMX bikes?) the journey that Eliot and E.T. go on still packs its punch, because the modern fairytale Spielberg and writer Melissa Matheson cooked up is pure magic. How else could you explain the whole world falling in love with a bug-eyed space-booger? Hell, you’re probably humming the theme to yourself just reading about it.