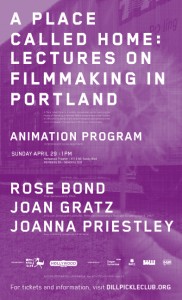 A Place Called Home is a monthly presentation series examining the history of filmmaking in Portland. Held at roving venues on last Sundays at 1PM, lectures aim to orient recent transplants and residents to the city’s rich lineage of film and how it informs our sense of place.

This second installment of the series, which takes place at the Hollywood Theatre (4122 NE Sandy), features the following guests:

ROSE BOND will talk about how her recent work takes animation out of the traditional movie house and into the streets with a series of public animated installations that engage architecture, cinema and urban space. Bond has been honored with numerous awards and fellowships from such prestigious agencies as the American Film Institute, The Princess Grace Foundation, Bloomberg L.P. and the National Endowment for the Arts. She is currently researching a proposed media installation for the Smithsonian’s Arts and Industries Building.

JOAN GRATZ will speak about her work as an independent animator in Portland. Gratz is an accomplished director, artist and animator, known for pioneering the animation technique known as claypainting. In 1992, she won an Academy Award for her film Mona Lisa Descending a Staircase. She has worked on many commercial films and shorts, including Return to Oz, Rip Van Winkle and The Creation. She is represented by LAIKA.

JOANNA PRIESTLEY will discuss the rewards and challenges of being an independent filmmaker. Priestley has directed, produced and animated 24 films that explore abstraction, botany, landscape, aging and human rights. She has received fellowships from Creative Capital, National Endowment for the Arts, American Film Institute, MacDowell Colony, Fundación Valparaíso and Millay Colony. Priestley teaches animation workshops worldwide, was founding president of ASIFA Northwest and has been a member of the Academy of Motion Picture Arts and Sciences since 1992.