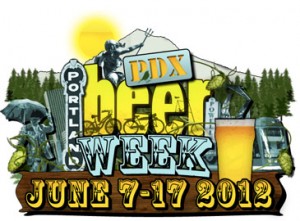 The 2nd annual PDX Beer Week takes place June 7 through 17, 2012 throughout the city.

In addition to having more breweries than any other city in the world, Portland enjoys one of the most advanced beer cultures — and a thirst for fun and educational craft beer events. Portland Beer Week aims to celebrate and expand that culture, not just by promoting Portland brewers and breweries, but tap houses, restaurants, food, and underexplored beer styles. Craft beer culture is not just about the beer itself but about the people, food, camaraderie, and education that comes along with this art form.

The [10-day] week-long festivities kick off on Thursday, June 7 at Spirit of 77 (500 NE MLK Jr. Blvd) with a mini brewfest, a Pop-A-Shot tournament, and the release of PDX Beer Week’s official beer: the 2012 reserve India Red Lager – a special collaboration beer brewed by Deschutes Brewery and Hopworks Urban Brewery.

Check out the PDX Beer Week calendar for a full list of affiliated events, including brewers nights, dinners, festivals, seminars, tastings, and more!