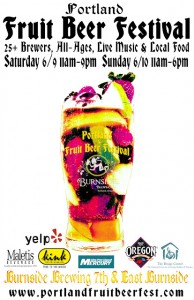 The only festival of it’s kind the PFBF celebrates the wonderful, creative and uniquely crafted fruit beers of the Pacific NW and beyond. Once fruit beers were a staple of every brewery but when quality product became harder and harder to obtain at cheap prices many breweries stopped making them or turned to cheap extract flavorings which in turn helped to give fruit beers a bad name in the craft beer community.

The Portland Fruit Beer Festival is bringing back the tradition with an outstanding lineup of the best fruit beers the world has to offer, many of them brewed specifically for this festival by local brewers. 25 different breweries are sending entries into this years festival with another 20-30 special rare one-off kegs for our rotating taps that will change throughout the festival.

Last year’s PFBF was my favorite beer festival of the year – the beers were surprisingly interesting and varied; there were very few IPAs [my least favorite style of beer]; and the Burnside Brewing setting with its mix of indoor, outdoor, and tented seating and standing areas was perfect for the early-June Portland weather.

Check out the beer lineup here.

Entrance to the PFBF is free for non-drinkers and open to all ages. Drinkers, however, need to pony up $20 for the tasting package, which includes a glass and 12 tickets – additional taster tickets are $1 each (1 ticket = 1 4oz pour, with some beers double or triple tickets) – pints of most beers are available for 4 tickets.

Visit PortlandFruitBeerFest.com for more details – and read the PFBF 2012 preview by Dave Knows contributor Mike Allen (a.k.a. the Gangster of Food – @GangsterOfFood on Twitter).