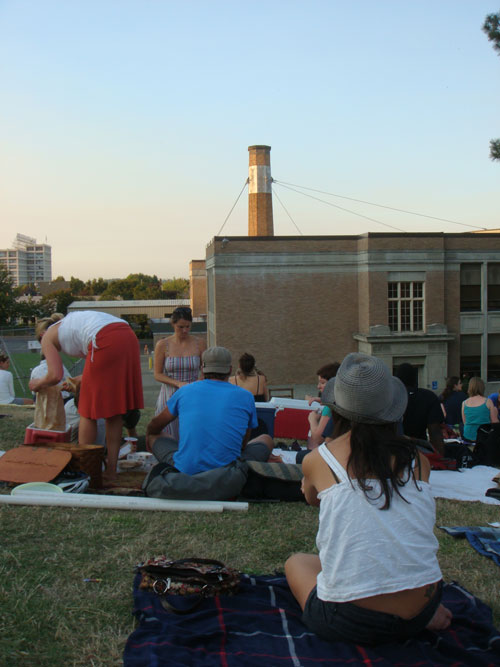 Tuesday night we made what has now become an annual pilgrimage to Chapman Elementary School in NW Portland to witness the spectacle of thousands of tiny birds swirling and diving and peppering the sky before shooting into a giant chimney on top of the school as the sun sets.

Several of our friends, all Vaux’s Swifts virgins, joined us. As the crowd gathered on the south lawn we speculated on why the heck these birds would choose a chimney for their roost (according to the Audubon Society of Portland they’ve been roosting at Chapman since the late 80s), and whether or not they were a native species, and whether or not we were being pooped on as the birds swarmed overhead.

When I got home I googled the shit out of the Vaux’s Swifts and found some answers.

The Portland Audubon Society‘s Swift Watch is a good place to start learning about the swifts. And the Vaux’s Happening site has more information about the swifts throughout the Northwest.

As the swifts gathered and swirled, a small falcon arrived to cull the herd. He perched atop the chimney all innocently. 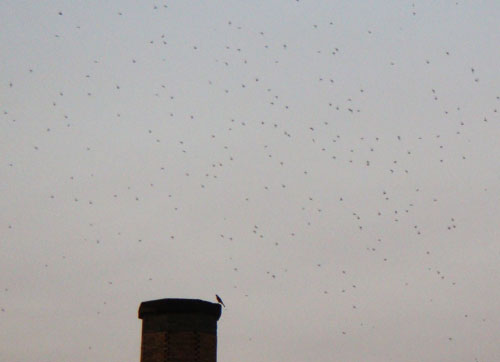 Last year we also saw a couple falcons, but I don’t recall them having any luck on our watch. This year, however, we saw at least one swift swooped upon and snagged. Impressive, but thoroughly booed by the crowd!

Eventually, and surprisingly suddenly, the birds collectively decide it’s time to enter the chimney. They form a huge swirling, shifting vortex above the chimney and start diving in.

Here’s a video, filmed by Heather!

Considering their numbers, the denouement doesn’t take very long. The crowd gathers up blankets and departs. We were treated to a lovely sunset over the West Hills as we prepared to leave. 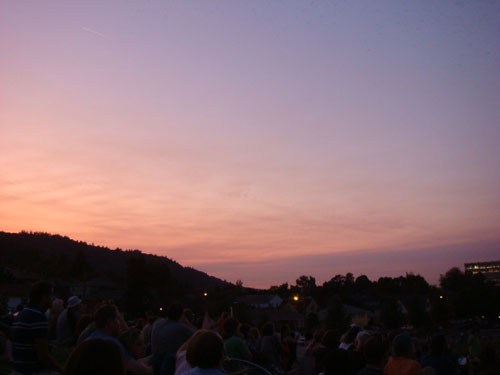 If you haven’t yet seen the swifts this year, you probably have another week or so before they head further south. Bring a blanket to spread out on the ground, or one of those short-legged concert chairs. We’ll be back next year!

All photos courtesy (and copyright) of Heather – thanks!