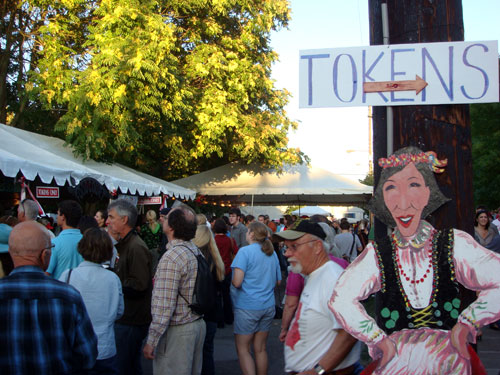 Again this year the Polish Festival lived up to its reputation as one of the best fall festivals in Portland. Like last year’s festival, which also took place during a spate of fantastic weather, the crowd was huge. By cleverly splitting up and tackling a line each, Heather and I managed to quickly acquire a pair of Okocim Porters and a combo plate to share. Placki ziemniaczane (aka potato pancakes), Heather’s raison d’être, would have to wait – the line snaked half a block down Failing Street, and seemed to be barely moving; we learned the wait was 45 to 60 minutes.

Joining us Saturday afternoon were our friends Lesley, Julie, Diane, and Karen. Later on Jake and Laurie met up with us too. We stood on a hillock under a shady tree to enjoy our beers and listened to the Oregon Polka Beats perform during the children’s polka contest and then the street dance.

Later we checked out the jewelry, clothing, Polish pottery, and sundries for sale in the adjacent parking lot vendor village. 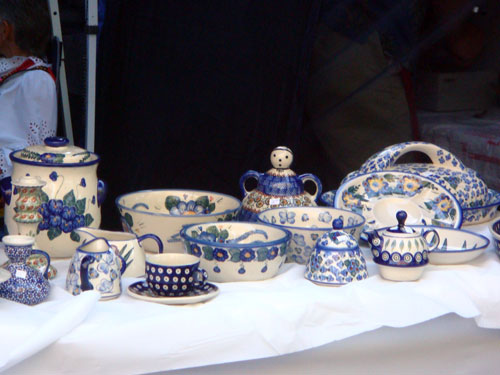 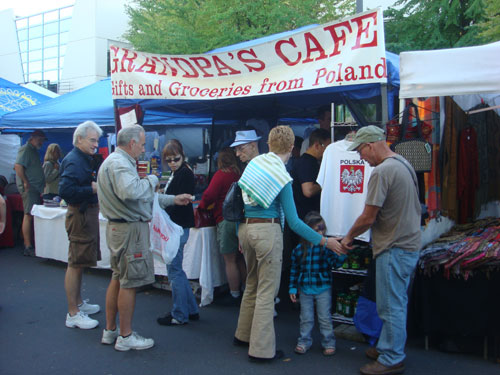 As the sun set the crowd became, mercifully, more manageable [Note to 2010 self: arrive around sunset, stay until close] . The placki line was not getting any shorter, despite the dissipating crowd, so Heather endured the wait while I searched out more beverages. Though none of my companions liked it, I really enjoyed the very sweet honey wine, Bernardynski Royal Mead. We tried several varieties of Polish beer that were new to us – all good.

We checked out the goings on in the Polish Hall too, where the Polka Beats were playing for the rest of the evening. 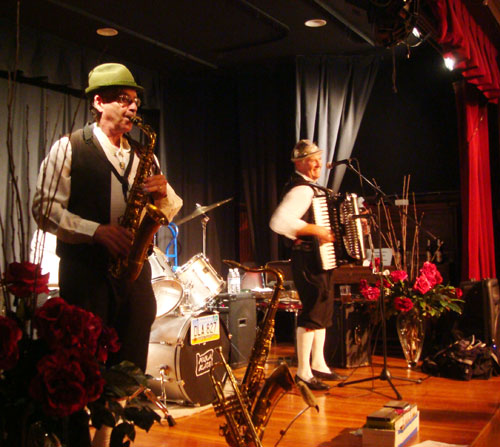 I dragged Heather out onto the dance floor for a bit, though I have no idea how to polka. Like I said, I really enjoyed the honey wine. And I’m really glad no one got video of my polka massacre.

We ended the night out under the big tent listening to a fantastic Portland based Eastern European punk/traditional band, Chervona. They rocked – we’ll be checking them out around town when we can.

Read Heather’s take on the 2009 Polish Festival, and her potato pancake adventures, here: A Night At The Polish Fest!