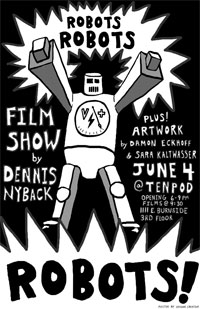 The Inventors (1934) in which Technocracy spoofers Stoopnagle and Budd built a Robot that terrorizes a girls school, Techno-Cracked (1933) a Ub Iwerks Flip the Flog cartoon again spoofing Technocracy with a home built runaway Robot, Rosey the Robot (1962) the pilot episode for the Jetsons, The Mechanical Monsters (1941) Superman battles flying robots, Robot Revolution (1980) about modern (at least then) robotics, and more.

Artwork by Damon Eckhoff and Sara Kaltwasser will be on display, some examples of which you can find at Defend The City and and Episode Creative – think terrifying bunnies and weird robotty things!

Art opening starts at 6pm, and the films begin at 9:30pm sharp. Cookies, popcorn, and beer will be provided!

via Tall Tales True Tales – Oregon Movies A to Z