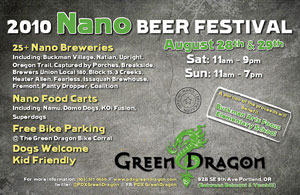 The Nano Beer Festival takes place Saturday and Sunday, August 28 2010 on SE 9th between Belmont and Yamhill, in front of the Green Dragon (928 SE 9th).

[They’re calling it the Second Annual, but last year they the fest was called the Mini Beer Festival; not sure of why they switched, since there’s already an annual Nano Beer Festival in Tigard.]

From 11am until 9pm on Saturday, and 11am until 7pm on Sunday, sample the offerings from over thirty local nano breweries, including Natian, Upright, Captured by Porches, Heater Allen, and Brewers Union Local 180. To be considered nano, a brewery must produce fewer than 1000 barrels of beer a year.

In addition to beer, several food carts will be on hand to provide sustenance, including Namu, Domo Dogs, Koi Fusion, and Superdog.

Bike parking is free, and dogs and kids are welcome. Shuffleboard and pinball play are free, and there’s a dog wash and washers tournament. Admission is $10, and includes five taster tickets; each additional taster is $1. Part of the proceeds go to the Buckman Arts Focus Elementary School.