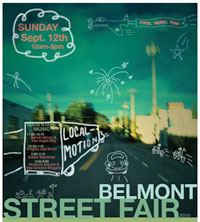 The 14th Annual Belmont Street Fair takes place Sunday, September 12 from 10am until 5pm. The fair extends from 20th to 48th on Southeast Belmont, with car free blocks from 34th to 37th.

Sponsored by the Belmont Area Business Association, the fair features over 160 craft booths, four music stages, food vendors, activities for the kids, and an alternative transportation expo. Free shuttles take visitors to various stops the entire stretch of the festival from 20th to 48th.

At 2009 Belmont Street Fair Heather and I shared a craft booth with our friend Allison, who sold her hand crafted cards, while Heather offered her paintings for sale.

Meanwhile our friends Justin and Katie manned a booth selling vinyl records, while they worked on their dream of building a boutique vinyl shop, cafe & bar specializing in soul, funk, jazz, latin, hip hop, deep funk and rare groove records. One year later, give or take a few weeks, and their dream has come true! Yup, Hall of Records is open for business, and they’re at 3342 SE Belmont. The official grand opening isn’t until Saturday, September 18th, but they’re soft opening is going well, and of course they will be open during the street fair – stop in for a beer, a sandwich, or record. It’s probably where I’ll be hanging out most of the day!