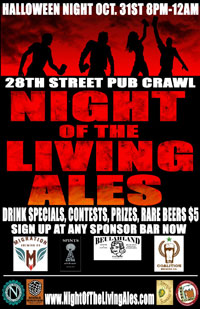 Night of the Living Ales offers a halloween event for adults who want to have a good time without the hoopla of various gigantic parties/shows in PDX. NotLA also has something for the discerning beer geeks of Beervana with special rare and even exclusive beers from some of Oregon’s best breweries like Upright Brewing, Double Mountain Brewing and Ninkasi Brewing plus a beer made by event organizers specifically for the crawl that will likely only be on tap Halloween, a 10 gallon batch of Peanut Butter Chocolate Oatmeal Stout!

The crawl kicks off at Migration Brewing (2828 NE Glisan) at 8pm, where four different barrels of Upright Brewing‘s dark rye beer with chocolate and spices will be featured.

And at 11pm, Coalition Brewing (2724) treats Night of the Living Ales revelers with their Peanut Butter and Chocolate Oatmeal Stout and Cascadian Citra hopped Dark Ale!

The Beer Goddess, Lisa Morrison of Beer O’ Clock, will be your guide on the pub crawl. Costume contests, each with a different theme, will occur at each stop, and of course there will be swag and happy hour specials! A wristband sets you back a mere $5, and is available at each of the participating bars, or via Paypal (at $5.50) on the Night of the Living Ales website.