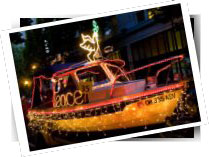 Now in its 56th year, the Christmas Ship Parade begins its run on Thursday, December 9 2010, with regularly scheduled runs through December 21.

The Christmas Ship Parade started in 1954 with one lone sailboat from Portland Yacht Club. Bows of green with some ribbon where tied along the rails and it paraded on the rivers. The next year the parade started to grow. Today, The Christmas Ship Fleet averages about 55 to 60 boats between the Columbia and Willamette River fleets. Things have changed from the first lone ship. Now the displays are brightly lit and can be seen from bank to bank on each river.