How would a Portlander celebrate the anniversary of Captain Arthur Phillip unfurling the British flag at Sydney Cove and proclaiming British sovereignty over the eastern seaboard of Australia on 26 January 1788?

How about with some handmade, Australian style savory pies?! The folks at Pacific Pie Company (609 SE Ankeny) continue their tradition of celebrating Australia Day in Portland with extended hours (10am to 9pm), all your favorite pies, and specials including beef & potato pie, Cornish pasties, vanilla slice, and Lamingtons! 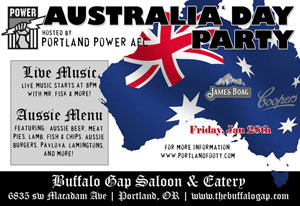 Also, if you can hold out until Friday, January 28, the Portland Power Australian Rules Football Club is throwing an Australia Day Party at the Buffalo Gap Saloon (6835 SW Macadam).

An Aussie menu, featuring roast lamb and vegetables, Pavlova, pies and chips, Lamingtons, and more, is available at 5pm. In addition there will be cold Aussie beer and decent Aussie wine, and live music.