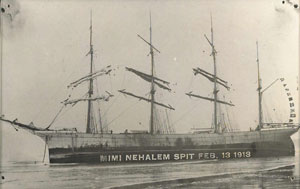 Lost in the fog and mistaking fires on the beach for the lights of a steamer in the mouth of the Columbia, the captain of the German square-rigger Mimi sailed her smack into the Nehalem Spit (about 40 miles south of the Columbia) on the evening of February 13, 1913.

Amazingly, no one was injured, and members of the crew were able to walk ashore in the low tide to meet with the insurance adjuster.

The tragedy occurred when efforts were made to refloat the Mimi on April 6. In heavy seas 18 perished as the barque capsized during the salvage mission.