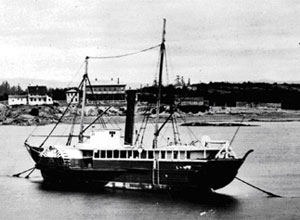 The Beaver was an England built 100 foot paddlewheel steamer; the first steamship to operate in the Pacific Northwest.

She left England on August 29, 1835, sailed (her engine and paddles hadn’t yet been installed) around Cape Horn, made calls at Juan Ferndandez and Honolulu, and arrived off the Columbia River on March 18, 1836. Finally, on April 10 she made it to Fort Vancouver, where her paddles and engine were hooked up.

The Beaver began her career as a Hudson’s Bay Company floating trading post. She was replaced by the more powerful Otter steamship after 17 years. The Royal Navy later chartered her to map the British Columbia coast, and then she spent her twilight years as a tow boat. That is, until her final trip on July 25, 1888 when she ran aground at Prospect Point in Vancouver B.C.’s Stanley Park.