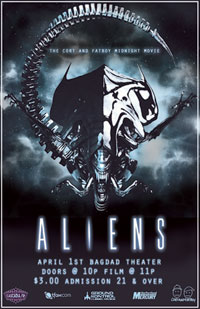 To celebrate the 5th anniversary of the Midnight Movie’s move to the Bagdad, Cort and Fatboy are bringing back ALIENS in 35mm, for fans who came out the first time, fans who discovered the Midnight Movie series too late to catch it, and new fans who have only seen the film on DVD, Blu-Ray, or neutered for basic cable at 3pm on a weekend. Now, for 3 dollars, they can purchase a ticket to witness Burke, Bishop, Hudson, Hicks, Newt & Ripley in all their cinematic glory, 25 years after they initially hit theaters with such force that they almost made Roger Ebert vomit and pass out after leaving the theater.