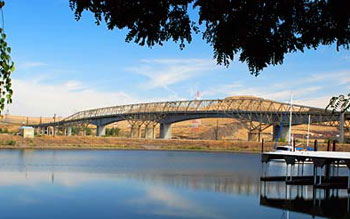 The Umatilla Bridge, the easternmost bridge connecting Washington and Oregon, was opened to traffic on April 15, 1955.

The steel cantilever bridge … carries Interstate 82 from near Plymouth, Benton County, Washington, to Umatilla County, Oregon. The structure is located just west of the McNary Dam and a bit farther west from where the Columbia bends from its north-south orientation to run west toward the Pacific Ocean.

The 3,308 foot long through-truss steel cantilever bridge was financed by Umatilla County bonds, which were paid off with tolls in 1974.

In 1987 a parallel concrete bridge was built adjacent to the original bridge.