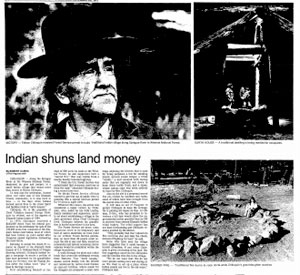 Edison Chiloquin, a member of the Klamath Tribes, fought the bank and the U.S. Government . . . and won!

In short, having gotten the benefit of the bargain from the treaties with Indian nations, the federal government no longer wished to uphold, even in the smallest degree, its side of the bargain.

All federal services to the tribe were canceled in 1961, and the tribe lost a million acres of pine forest and their claim to the Klamath River headwaters.

The majority of the members of the tribe received payouts from the federal government for their shares of the land. But nearly a quarter of them, including Edison Chiloquin, refused payment. At the site of his grandfather’s village on the banks of the Sprague River, Chiloquin lit a Sacred Fire on April 18, 1976. The fire burned for over a five and a half years, until:

In January 1980, President Jimmy Carter signed the Chiloquin Act, which gave Edison Chiloquin and his descendants title to 580 acres for what is known as Pla-ik-ni Village. The boundaries for the village were finalized on April 8, 1985.