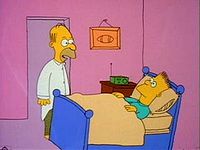 Audiences were introduced to The Simpsons for the first time, in the form of interstitial shorts on The Tracey Ullman Show, on April 19, 1987.

That first short, titled Good Night, featured the whole family, other than Grandpa who was introduced later. Here’s the Wikipedia summary:

Homer and Marge say goodnight to their kids but all does not go according to plan. Bart philosophically contemplates the wonders of the mind, Lisa hears Marge say “Don’t let the bed bugs bite” and fears that bed bugs will eat her, and Maggie is traumatized by the lyrics of “Rock-a-bye Baby”. Ultimately, all of the kids decide to sleep with their parents.