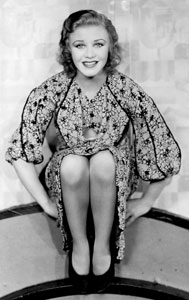 Fourteen year old Ginger Rogers, fresh off winning the Texas State Charleston Championship, toured the western United States for six months as the star of the act Ginger and the Redheads.

One stop on the tour was Medford, Oregon, where she appeared at the recently opened Hunt’s Craterian on April 21, 1926. Her performance impressed the Medford Mail Tribune: Miss Rogers is a winsome little miss with captivating mannerisms and a pair of feet that make the most intricate dances seem easy.

Of course Miss Rogers went on to great fame in vaudeville, on Broadway, and in over seventy films – particularly notably as Fred Astaire’s partner in ten films.

In 1940, she and her mother Lela bought a working ranch on the Rogue River near Shady Cove, where she spent many months each year. “I consider myself an Oregonian,” she said in a 1982 Mail Tribune interview. “I vote in Oregon and pay my taxes here.” When she sold the ranch in 1990, Ginger moved to a new home on Pioneer Road, Medford.

She appeared on the Craterian stage one more time, on November 21, 1993, in a benefit for the recently renovated theater. She showed one of her favorite films, Roxie Hart, and answered questions from the audience.

The theater was rechristened the Craterian Ginger Rogers Theater in 1997 in honor of its history, and her graciousness.