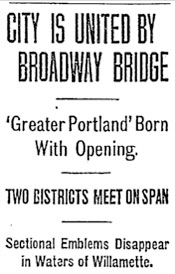 Portland’s Broadway Bridge opened with great ceremony on April 22, 1913. It became the fifth span across the Willamette in Portland, and first to unite North and Northeast Portland with the West side.

East joined west, north joined south and distant sections of the city were brought into close communion when the massive new Broadway bridge across the Willamette was officially dedicated and formally opened yesterday afternoon.

At an elaborate ceremony children exchanged East Side and West Side flags at the middle of the bridge, then threw said flags into the river after being presented with a “Greater Portland” flag. Dignitaries from both sides of town gave speeches as thousands watched and listened from the bridge and the banks of the river. A car parade lined up all the way from Alberta street in anticipation of the bridge opening to traffic. But first, a poem composed for the occasion by June McMillan Ordway was read to the assembled crowd by Miss Josephine Hoben, daughter of Captain Hoben, municipal marine surveyor:

Majestic, grand, we acclaim today,
For this great structre, amid glad cheers,
Now praise we offer to those who planned,
Who hoped and waited through many
years

And those who helped with courage strong
This great achievement that prompts ou
praise,
Were brave and true as men of old,
When greatest trials beset their days.

They builded well of iron and steel,
Above Willamette’s murmuring flow,
Here in the storm of breezes calm
The world’s stately ships may come and go.

Here it shall stand a sentinel,
With gleaming lights o’er harbor and
home.
In Summer’s calm or Winter’s night
Ever guiding belated who roam.

Ah! yes, we know they builded well,
And waiting thousands pronounce it good,
And may we tell in future years
Of this great work with pride as we
should

In our proud city’s changing years,
May it stand unchanging, ever grand.
In our pleased eyes as ever new
As firm and strong from the workman’s
hand.

Over the bridge strange steps may go,
The step of both weary and glad.
The step of youth with lightest heart,
And oft the step of sullen and sad.

In greatest grandeur did it rise,
And all is finished, strong and new,
While those who labored long now know
This is the day when their dreams came
true.