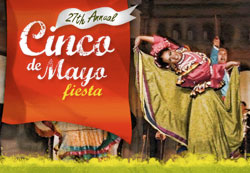 Join tens of thousands this weekend at Waterfront Park between the Hawthorne and Morrison bridges to celebrate the Mexican army’s 1862 defeat of French forces at the Battle of Puebla:
It’s the 27th annual Portland Cinco de Mayo festival!

And per tradition there will be a fireworks demonstration at 10pm on Friday.