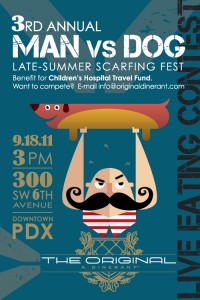 Some of them deprive themselves of nutritious sustenance before taking their marks. Some of them use water as a lubricant to make these little torpedoes slippery enough to go down faster. Some of them simply break them in two and simultaneously inhale both halves like shameless sword-swallowing ducks.

But either way, they’ve come every year for the last two years, to participate in the competitive eating contest they’ve come to know as MAN vs DOG. . .

But if we truly wish to properly describe this annual event, we should probably classify it as WOMAN vs DOG, or even WOMAN vs MAN, because, of the three winners we’ve had in the last two years—2010′s event ended in a draw—two have been, chromosomally, Double-Xers.

The competition starts at 3pm sharp. Contestants compete for pride, prizes, and to benefit the Children’s Hospital Travel Fund.