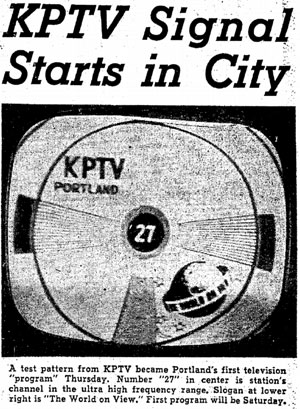 The test pattern (pictured to the right), which began at 12:01am on September 18, 1952, was the very first telecast from KPTV’s Council Crest tower. The programming on September 20, starting at 4:30pm, featured three shows:

For most of that first year KPTV used shows from all the networks: ABC, CBS, DuMont, and NBC. On June 1, 1953 it became an NBC affiliate, and KOIN, Portland’s first VHF TV station, began broadcasting a year later as a CBS affiliate.