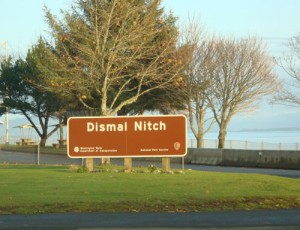 Upon encountering stormy weather on November 10, 1805, only a few miles from their Pacific Ocean goal (and possible rendezvous with a trading ship), members of the Lewis and Clark Expedition took shelter in a small cove under steep cliffs on the north side of the Columbia River.

The rain soaked party spent that night and next day, miserable. As conditions again worsened (hail! lightning!) on the 12th, the party moved a few hundred yards to a small point and were pinned down by the weather for another two days. Finally, on November 15, 1805, Clark recorded in his journal their escape:

About 3 oClock the wind luled, and the river became calm, 〈we〉 I had the canoes loaded in great haste and Set Out, from this dismal nitich where we have been confined for 6 days passed, without the possibility of proceeding on, returning to a better Situation, or get out to hunt, Scerce of Provisions, and torents of rain poreing on us all the time—

The dismal nitich is now known as Dismal Nitch, and Lewis and Clark’s miserable few days is commemorated with a surprisingly pleasant little highway rest area.