I hope for this to be a fairly comprehensive list of the ongoing (not one-time) holiday displays. But if you know of others please comment below and I will add more!

Peacock Lane is a narrow residential street one block east of Cesar E. Chavez Boulevard (née 39th Ave) between SE Stark and Belmont. Since the 1920s the residents of this stretch of mostly Tudor style houses have gone a little crazy with the Christmas lights [more]

Once again Portland’s historic Pittock Mansion is going all out for the holiday season. This year, from November 21 through January 2, the theme is Christmas Around The World.
“Every year, starting more than 40 years ago, dozens of volunteer decorators, designers, and local organizations donate their time and talents to transform Pittock Mansion into a Christmas wonderland for approximately 17,000 delighted visitors during the holiday season.” [more] 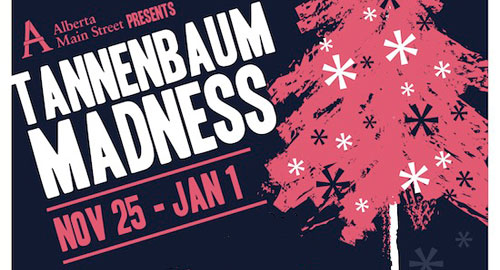 Alberta Main Street‘s Tannenbaum Madness is a walking window tour of whimsical, wacky and artistic trees.
“Tannenbaum Madness is an event, inviting families and art lovers to bundle up and take a stroll up Alberta Street this holiday season. Businesses up and down NE Alberta Street create a walking tour of whimsical, artistic, and unique holiday trees on display it in their front windows.” [more]

The 2011 ZooLights ignite for the first time on Friday, November 25. The sparkling lights and brilliant hues will be cast each evening (except Christmas Eve and Day) through January 1, 2012.
“More than a million lights transform the Oregon Zoo into a luminous winter wonderland filled with moving sculptures, forests of lighted trees and animal silhouettes.” [more]

“Join Santa Claus and his elves for a magical ride behind Portland’s famous steam locomotives. Vintage rail cars transport you through wilderness in the heart of the city.” [more]

“Since 1993, a journey through Winter Wonderland has become a Holiday tradition for many families, friends, and social organizations to celebrate the spirit of the holiday season.” [more]

“The boats, 14 to 65 feet long, are brightly decorated for the holiday season. The ships draw thousands of residents each night to the banks of the rivers for the performances. Up to 60 holiday boats are expected to make up the two fleets.” [more]

Christmas in Dairyville at Alpenrose

Our old western town has been transformed into a winter wonderland where you are invited to peek at the animals on display in nostalgic Storybook Lane, stroll Dairyville’s vintage storefronts, enjoy refreshments, listen to local choirs sing, watch old holiday movies in the Opera House and, of course, have a visit with Santa! This year, the 4-H is proud to offer professional Santa photography to capture precious memories in a range of packages that benefit the club’s efforts to bring youth programs to the community. [more]